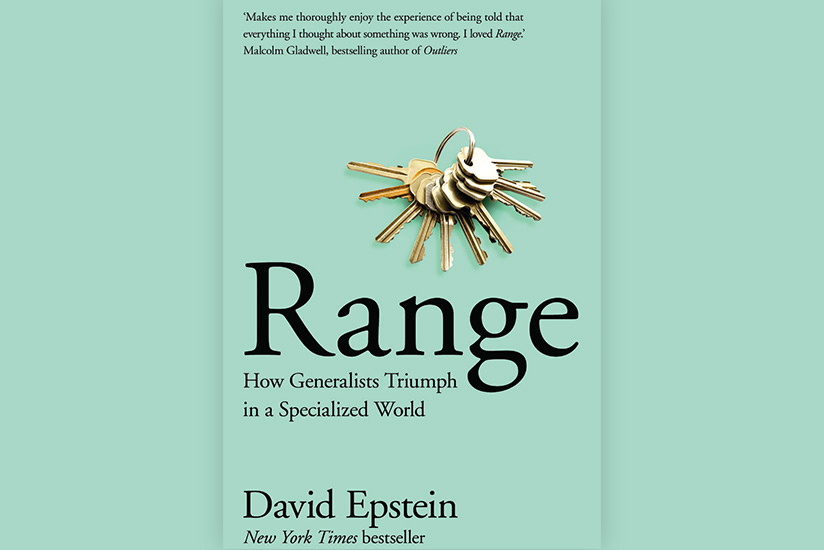 In his new book, Range: How Generalists Triumph in a Specialized World, David Epstein explains the benefits of thinking broadly and gaining a breadth of experiences and perspectives in different domains before focusing in and ramping up practice in one area.

Many experts around the world believe that if anyone wants to develop a skill, become good at something or even lead their field of interest, they should begin early, focus intensely and rack up as many hours of technical practice as possible to excel at it. Otherwise, they say, one will never catch up to the people who got a head start at specialising early. But journalist David Epstein disagrees with this theory in his latest book, Range: How Generalists Triumph in a Specialized World.

According to Epstein, early and narrow specialisation applies to a limited number of skills and therefore, fails to set its adherents up for success. Early in the book, he talks about some well-known athletes and musicians—professionals who are synonymous with early specialisation. For instance, he cites the example of tennis legend Roger Federer, who tried different sports as a teenager before focusing on tennis. Epstein says that although Federer started later than players who had been working with strength coaches, sports psychologists and nutritionists from early childhood, a late start did not impede his development. Instead, despite being at an age when most tennis players have retired, Federer ranks among the top three in the world today. Epstein compares this to Tiger Woods who took up early and fiercely, single-minded specialisation in golf from the age of two, and says that his story is cited by many people as an example of how mastery of a subject needs to be done. But Epstein states, with some evidence, that Federer’s story is more common than that of Woods. Thus, as you read the book, you will learn that broad early experience and delayed specialisation is a common practice among athletes who go on to become elite in their field.

When it comes to musicians, Epstein states that they achieve greatness through incredible diverse career paths, but that early specialisation is often not the way to develop skills. He cites the example of Sviatoslav Richter, one of the greatest pianists of the 20th century, who began taking formal piano lessons only at 22.

In the book, Epstein stresses that early sampling is necessary, as is diversity. Referring to studies by researchers on the development of elite athletes from early childhood, he says that it has been observed that in almost every sport there was a ‘sampling period’ where athletes gained a variety of physical proficiencies and learnt about their own abilities and interests. The athletes who delayed specialisation were often better than their peers who specialised early—and who plateaued at lower levels.

Epstein also talks to scientists, academics, managers and other professionals who have moved from one field to another and he points out that this often benefited them greatly. Thus, Range: How Generalists Triumph in a Specialized World is all about discovering that in almost all fields or professions—particularly those that are complex and unpredictable—generalists are better positioned than specialists to excel. The book drives home the message that even though generalists often find their career path late, they juggle multiple interests and not focus on just one. Moreover, they are more creative and agile and are able to make connections that their more specialised peers cannot see.

The book is the first of its kind that proves that if the world today with its high demand for hyperspecialisation requires people with Tiger Woods’ precocity and clarity of purpose, it also needs people with ‘range’—who, according to the author “can start broad and embrace diverse experiences and perspectives while they progress”.