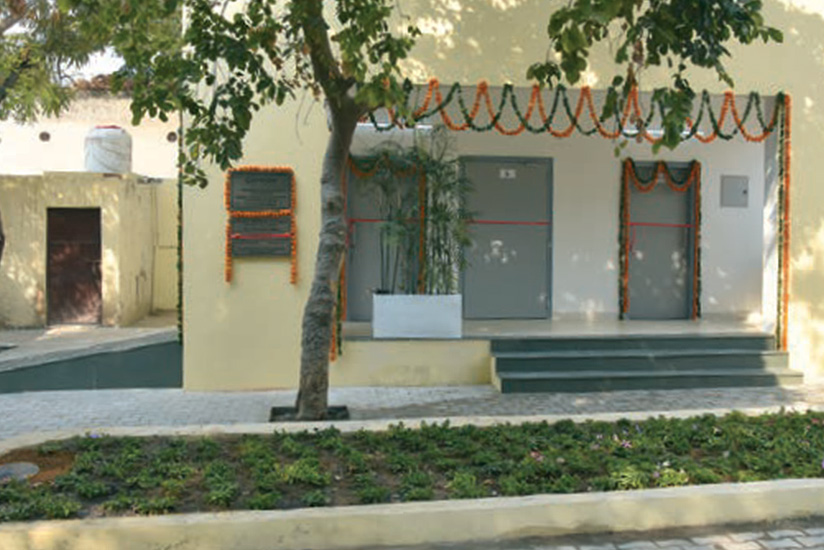 Entrance to the new toilet block

A few months ago, Candor TechSpace adopted a school in Tikri, Gurugram for three years to improve its infrastructure and educational facilities. It has recently constructed a toilet block and drinking water station in the school premises.

In the third quarter of 2018, after signing an MOU with the Haryana government, Candor TechSpace adopted a school in Tikri, Gurugram for three years as part of its CSR programme. The objective was to develop the overall infrastructure and educational capabilities of the school in phases. Under the first phase, which focuses on improving the school’s infrastructure, Candor has built new toilet blocks, a drinking water station (with an RO unit and water cooler), a utensil washing area and a covered drainage system which is connected to the main sewage system.

The toilet block comprises 4 separate toilets for both male and female students. There is also a toilet that is equipped with a wheelchair ramp for the convenience of differently-abled students. To ensure a clean and healthy environment at the school, Candor has placed dustbins for collection of waste in every corner of the premises. A professional housekeeping agency has also been appointed to maintain and manage the facility on a daily basis.

The inauguration of this new school infrastructure took place on 16th January 2019 at the hands of Shri Ravinder Yadav, A few months ago, Candor TechSpace adopted a school in Tikri, Gurugram for three years to improve its infrastructure and educational facilities. It has recently constructed a toilet block and drinking water station in the school premises. Safeguarding School Sanitation Joint Commissioner-IV, Municipal Corporation of Gurugram (MCG) in the presence of Shri Kuldeep Yadav, Councillor, Ward 29, MCG and Smt. Prem Lata, DEEO, Gurugram. Speaking at the event, Sanjay Yadav, Head – Legal & CSR, Candor TechSpace, said, “At Candor TechSpace, we believe that quality education is a fundamental right of children, regardless of their background or financial state. Unfortunately, there exists a huge gap between the quality of infrastructure in private schools and state-run public schools. We have strived to bridge this gap to some extent through this initiative.”

Candor has also plastered the school’s boundary wall, which had previously been in a precarious condition. It has roped in an award-winning artist to decorate the walls of the school’s classrooms with artworks in themes that spread awareness about critical issues like water scarcity, environmental sustainability and hazards of pollution. Plans are also underway to improve the school’s play area by equipping it with swings and other play accessories.

The second phase involves upgradation of the classrooms with better facilities (including a resource centre in every classroom) and development of a central green area in the school, for which the students would be encouraged to plant trees in the campus.

We, at Candor, are positive that these new amenities will significantly improve the students’ day-to-day experience at school and add to their learning abilities.