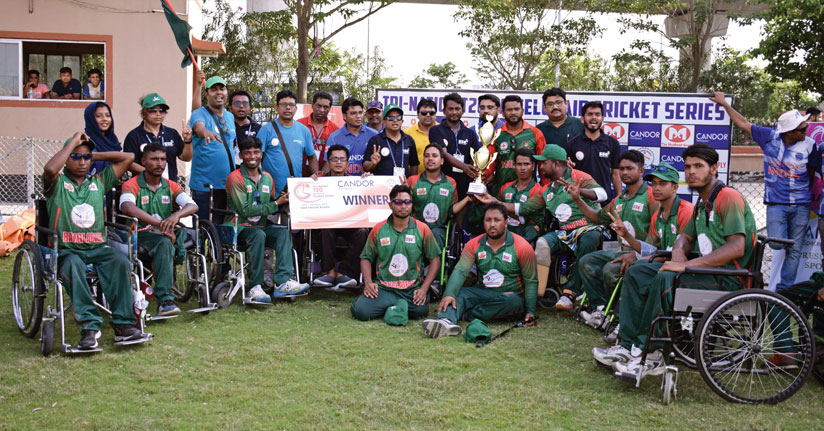 The third edition of the ‘Tri-nation T20 Wheelchair Cricket Series’ held at Kolkata’s NKDA Stadium from 26th to 28th April 2019 saw splendid performances from all the participants. We bring you the full report of this exciting tournament that was conducted by Candor TechSpace in association with Wheelchair Cricket India (WCI).

From 26th to 28th April 2019, the city of Kolkata hosted a T20 cricket series with a difference at the NKDA Stadium. Known as the ‘Tri-nation T20 Wheelchair Cricket Series’, it was organised by Candor TechSpace in association with Wheelchair Cricket India (WCI). This event brought together the best wheelchair cricketers from India, Nepal and Bangladesh for a spirited showdown that celebrated sportsmanship, competitiveness and above all, a love for cricket.

The captain of the team from India, comprising 14 players, was Somjeet Singh. He had also led the Indian team during its wins over Pakistan and Bangladesh in the previous two editions of the Trination T20 Wheelchair Cricket Series. The final match this time was played between India and Bangladesh on 28th April. Bangladesh emerged as the winner after an incredible run of form gave them a 9-wicket victory.

Candor TechSpace has always stood for equal opportunity and this tournament—a first in East India—supports the organisation’s goal to ‘enable opportunities for all’. The tournament also furthers WCI’s core message of how a physical disability should not be taken as a sign of incapability. Founded in 2011, WCI is the brainchild of international paraathlete and activist Pradeep Raj. He established this association after a visit to Korea where he interacted with wheelchair cricket delegations from Bangladesh and Pakistan.

Speaking about the tournament, Sanjay Yadav, CSR Head, says, “Time and again, people have shown how ambition cannot be limited by physical capabilities and how a perceived disability can be overcome through determination and dedication. At Candor TechSpace, we salute this aspect of the human spirit. We wanted to change the way people think about sports and sportspersons by providing an opportunity to wheelchair athletes from India, Bangladesh and Nepal to showcase their talent. This partnership withWCI is yet another of our efforts towards bringing specially-abled people into the mainstream and leveraging their talent across different domains.”

Pradeep Raj, Founder, Wheelchair Cricket India, says, “Wheelchair athletes are an inspiration for all. They go through rigorous training and therapy to strengthen their upper body in order to be competitive. This event has proven once again that being in a wheelchair is no restriction to achieving what one wants to. We are delighted with the reception that we have received and are confident that wheelchair cricket will soon become as popular as the Paralympic Games.”

Indeed, Candor TechSpace hopes that these players receive recognition and support from more and more people and organisations, and that they continue to make the country proud wherever they play.