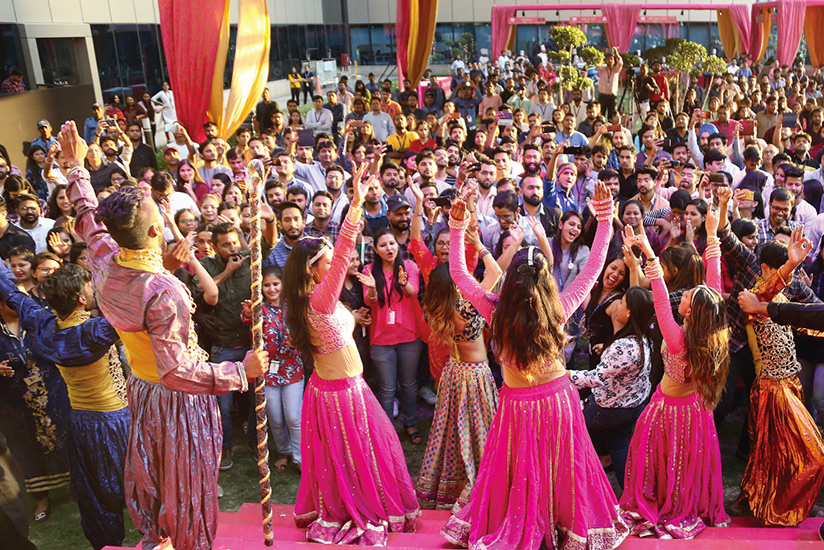 The audience having a gala time

Candor TechSpace celebrated ‘Diwali Dazzle 2019’ at its campuses in Noida on 22nd October and in Gurugram on 24th October with much vigour and enthusiasm. We take you to the midst of the lively celebrations.

Diwali is one of the most awaited festivals in India, commemorating the victory of good over evil and the return of Lord Rama and Sita to Ayodhya. This is the time when people wear new clothes, participate in traditional customs and rituals, feast on delicious food especially sweets, have get-togethers and spend time with near and dear ones. As far as workplace celebrations go, many organisations decorate their offices and distribute sweets and gifts to their employees. At Candor TechSpace’s campuses in Gurugram and Noida, Diwali was celebrated on a grander note than before, with the professionals working in every campus eagerly participating in the festivities.

‘Diwali Dazzle 2019’ took place at Candor’s two campuses in Noida on 22nd October and at the two campuses in Gurugram on 24th October. The lobbies, food courts and venues in all of these campuses were decorated with lights, cut-outs, standees and posters. A stage was put up in the common area for performances.

Various fun engagement activities and games were scheduled for the occasion. Several competitions such as singing, dancing, diya painting and rangoli making were Candor TechSpace celebrated ‘Diwali Dazzle 2019’ at its campuses in Noida on 22nd October and in Gurugram on 24th October with much vigour and enthusiasm. We take you to the midst of the lively celebrations. also held. It was a joy to watch the attendees participate wholeheartedly in them. Food stalls offering delicious food and drinks were also set up, adding to the richness of the celebrations. Different types of dance performances by skilled dance troupes left the audience mesmerised.

The biggest highlight of the celebrations in every campus was the respective live band that was specially invited to perform for the occasion. At the Sector 135, Noida campus, the Tamasha Band, with their performers, DJ, percussionist, violinist and dhol players, captured the audience’s hearts. Then there was Bolly Jammers, a unique DJ-based band that brought its expertise of performing hundreds of shows in locations such as Dubai, Sri Lanka, Bangkok and Kathmandu, to Candor’s campus in Sector 48, Gurugram. Attendees in the Sector 21, Gurugram campus, on the other hand, got to experience the blend of Sufi, Haryanvi and Punjabi Folk and Rock music belted out by Nasya, a fusion rock band based in Delhi.

As the attendees danced to the catchy music and participated in the various engagement activities and games on offer, they sported big smiles on their faces. Have a look at this fabulous spread of photographs and see for yourself!